Home yesterday from 2 weeks in Florida, feel a bit jet-lagged but gotta type while I remember everything. It was pretty amazing. I posted pics of our trip to Instastories but promised to do a full blog post when I got home for those interested. So the usual, if its not for you no need to read – its long. Ill be back to fashion tomorrow.

This was our first time doing Florida with the kids & to be honest I wasn’t mad to do it – mainly the thoughts of the parks in the heat and the cost! It ain’t cheap! Amy begged, Paul buckled & the trip was booked. In fairness to Paul, he did everything, booking & research & my friends sent me their information on Orlando, where to stay, eat and how to do the parks. It is pretty overwhelming if you have never gone before.

Our plan was to stay 6 nights in Orlando and then hit the beach at Naples for 9 nights. The journey to get there was epic! We went American Airlines to Charlotte and then a connecting flight to Orlando to save a bit of money. If money not an issue – go direct!! Or else fly into somewhere you might want to spend a few nights in and then head to Orlando.

We rented a car from “Thrifty” which was good value until they add in prepaid daily toll charges and GPS – they were practically the price of the car again and not needed. The toll is so cheap so we shouldn’t have bothered with that extra cost. Paul had downloaded the maps to his phone but if you don’t have them or don’t want to pay data roaming charges then you will need GPS – otherwise goodnight, one wrong exit and who knows where you are. There was a lot of “Jaysissss” outta me! I like to co-drive 😉

We stayed at the Sheraton Vistana Villages on International Drive. Massive room, bit retro in style but still very nice – and we were never really there. It had two bedrooms, two bathrooms, jacuzzi bath, kitchen, balcony, & couch area and utility. The grounds and the pool all lovely, plus its so central to everything.

We bought the 14 day 3-Park Universal Pass before we left as its better value and even if you only go a few days it still works out better than a daily pass. We did Studios the first day after a trip to IHOP for brekkie – massive portions – the theme of the holiday. We did the pool in morning then hit the park around 2 and it wasn’t as mental busy as I thought. There was a bit of moaning from Matthew about being scared and Amy being bored of anything that wasn’t a thrill ride so yes I lost the plot as the moaning steadily inreased!!! First holiday meltdown, day 1. To be expected I think. We threatened that was it!!! No park tomorrow or for the rest of the holiday….the usual! They piped down. We had mexican, a beer and then a turkey leg in the park – not the best combo but had to try the turkey legs. They are huge, but not the best “in-between rides” snack.

We all calmed down a bit after day 1 and day 2 was better. Did Islands of Adventure and everyone preffered this section of the park and in better humour. Again we went from around 2 to 9 and then had dinner in Bubba Gumps in the park. The thrill rides here are brilliant, the water ones & the Hulk. Harry Potter is amazing!!! Think the “Forbidden Journey” was everyones favourite and didn’t scare the absolute shite out of me. Its like you are on a broom flying with 3D effects.

Day 3 was Volcano Bay. My favourite! It’s the water park section of Universal. We lasted till lunch then rain came so some rides closed so we headed back to chill at hotel and went to dinner in Benihana that night, a tepenyaki grill you can walk to from hotel. Really nice but pricey, or maybe its just wine makes everything add up.

Day 4 we did Buena Vista Outlet and Vineland in the morning. Buena Vista has loads – Under Armour, Nike, Tommy, Ralph, Converse but no Victoria Secret or Pink – is life worth living!!!! We then did Vineland which I preferred as had Kate Spade at really good prices and makeup, perfume as well as loads of brands, but the boys were done! Cue more moaning & then messing – turned around to see Matthew wearing a pink MAC lipstick all over his face. Time to go.

We did lunch at The Outback Steakhouse. Yummy brown bread to start and food all good – just massive! The Bloomin onions – also yum! Then we went back to Volcano bay from around 4 to 8 and that was great craic. Not too busy or too hot. The family hoop rides are a great laugh.

For our last day we decided not to do Disney as our kids are that bit older and once Matthew decided he wasn’t scared anymore he became a rollercoaster maniac, all about the thrill ride. So we decided to go to Busch Gardens. Its animals and really big rides. I backed out of 4 as too scared but kids loved it, this was their favourite park. Food their was pretty gross but hey what’s another burger. Then we were done on parks – and I think even Paul was delighted. If we had more time Im not sure we would have done anymore parks. We wanted to take a trip to see Celebration and Winter Gardens but just no time.

We drove to Naples the next day to an Airbnb Paul found. He did good. We had no idea what to expect but Naples is AMAZING!! Stunningly beautiful. We stayed in 707 Briarwood and the host in Dora. I was in love with the house. The décor, the kitchen island, the pool, the super oganised towel closets and spice drawer. I did start to pretend it was my new American life!

In Naples we basically took it down a notch and chilled. It is a gorgeous place. The houses are WOW down near the beach and the beach itself is paradise. Sunsets on the beach are unreal. Postcard style. 5th Avenue and 3rd Street are full of lovely restaurants and shops and lots of posh people with fancy cars and golf carts – we were taking the tone down ha. Matthews GAA top was not the look of the evening – more white chino and stripe Ralph shirt.

We did a mix of eating in and eating out. All the food we had here was good. Osterio Tulia & Molto, both on 5th very nice. Also Bha Bhas and Chops recommended but think without the kids. Hob Nob too for drinks. Tommy Bahamas and Sea Salt both on third were also on list but ran out of time and need to book places at weekend. Naples Beach Hotel has a really nice bar to watch the sunset in too and have a beer & barfood & people watch. Tacos & Tequila is really good value and soooooo tasty! Especially the happy hour margaritas. The only really gross meal was Olive Garden. It’s a chain and it was just not good – too salty too greasy. We did Cheesecake Factory too – its nice, huge huge menu and again big portions…no one could finish their cheesecake but we got doggie bags so all happy.

We went to two other beaches nearby Clam Pass & Barefoot Beach. Still preferred the one nearest to us, just down a bit from Lowdermilk Beach. Really quiet and no high rises. Barefoot worth a visit though for the unreal houses on the private 2k drive down to the beach. Never seen anything like it. Naples Pier also beautiful. Everything is basically!

The only trip we did was with Captain Greg on the Everglades – its brilliant! We booked with Speedy AirBoat Tours and its about a 50 minute drive from Naples but worth it. They fly through the mangroves at high speed and talk you through the area. Loved it.

To get home we drove to Miami just to see if for a few hours and grab lunch there. Its a mad spot! The drive alone to get there with 6 lanes of traffic at high speed nearly had us divorced! We ended up missing bridge to Miami Beach and ended up on Dodge Island – apt! We saw the beach, ate and people watched. Some vibe there, totally different to Naples.Then we flew Miami to Heathrow and then Dublin. All in great form here today 😉 😉

So anyway, I hope this is useful for anyone planning a trip. For me, I wouldn’t go back to Orlando. I shop so much as part of the day job that even the outlets didn’t call to me and the boys had zero desire for any shopping. Amy loved it though. My favourite part was Naples and the kids said the same too. They LOVED the parks but think the downtime and pool in the house meant everyone got a chance to properly chill and that was best bit. No Fortnite on the playstation was bliss as well. We are only home a few hours and the rage and screaming has started again – hate that game!

We had wifi but I only loaded up a few pics to stories each day so the break from social media and the shops was so needed. Its not a cheap holiday and eating out is pricey with tips and drink but I do think its been our best family holiday yet. Also its sooooo humid! 35 degrees on average but aircon saved us. You also need a car – would love to walk to restaurants more at night but wasn’t really an option. Only affected “Poor Paul” though – he is still traumatised by his many failed attempts to get onto the Pink Flamingo Float. It exploded in the end. 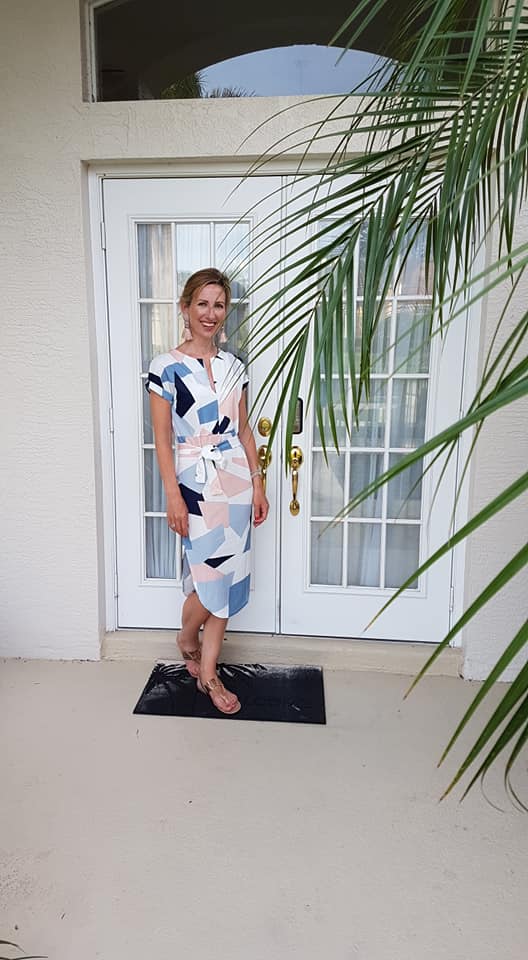 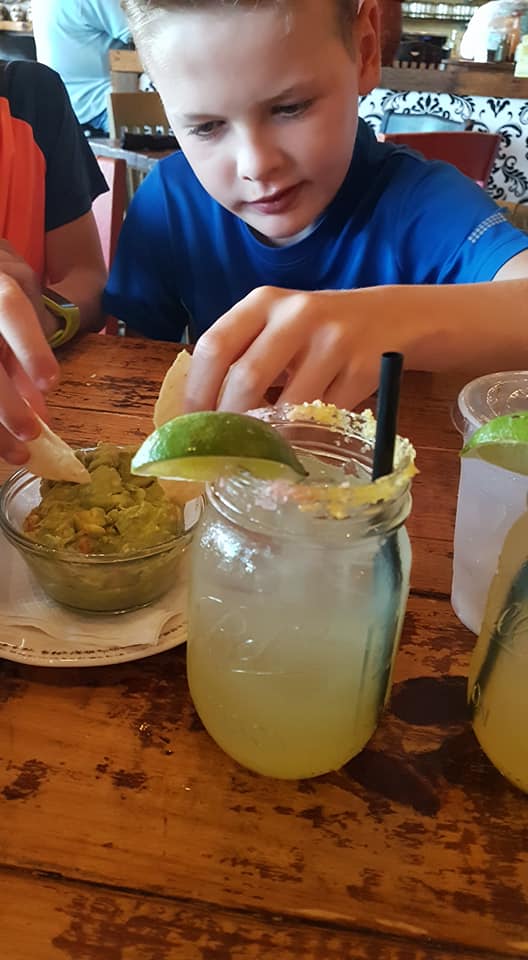 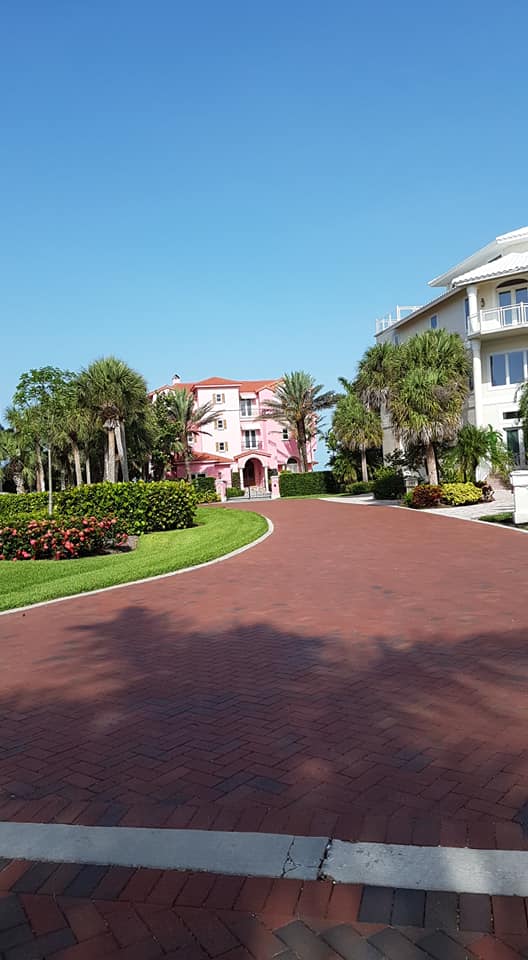 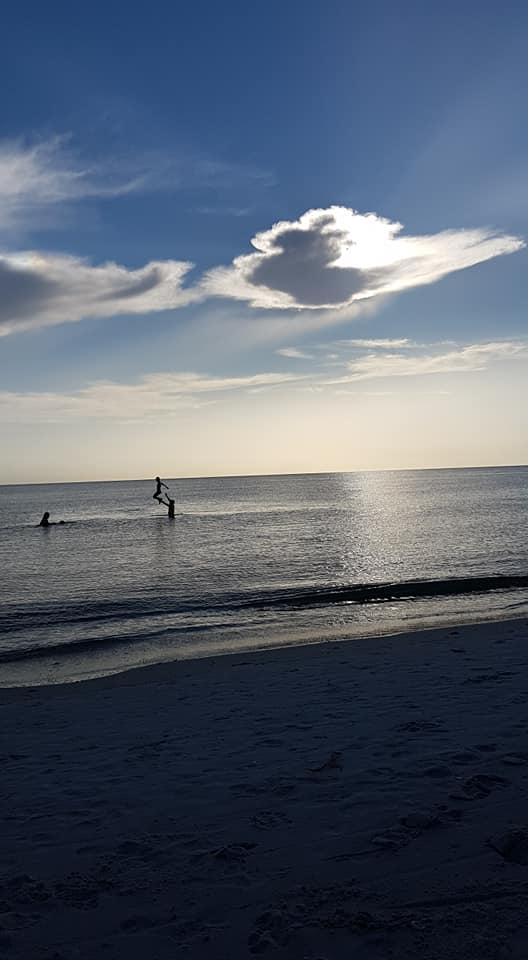 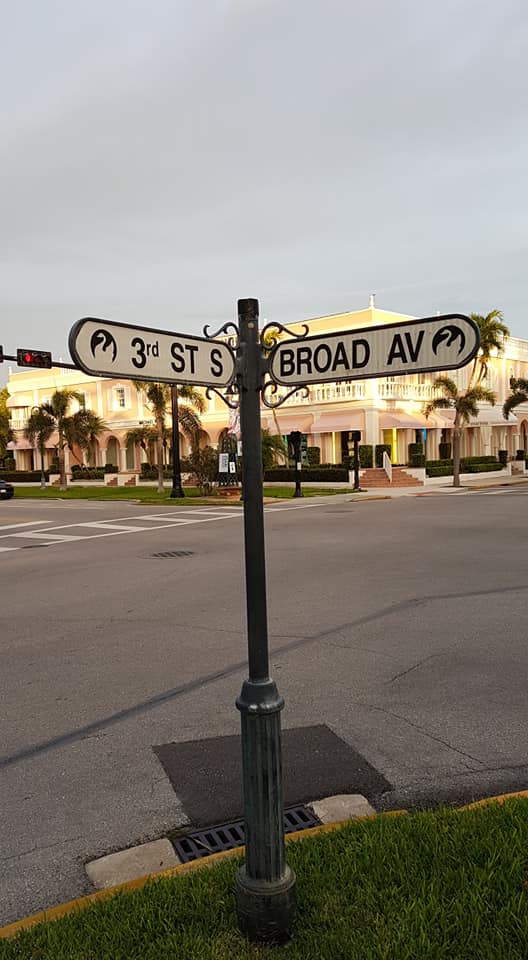 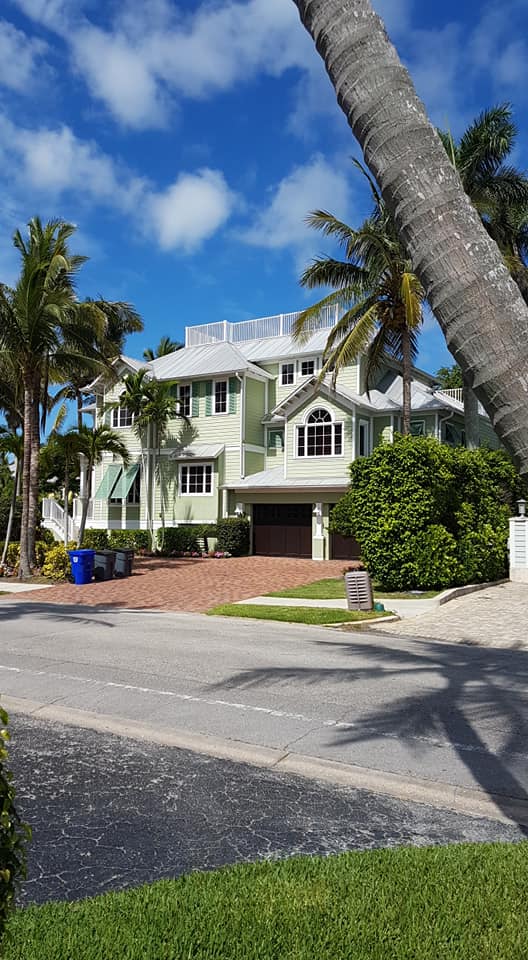 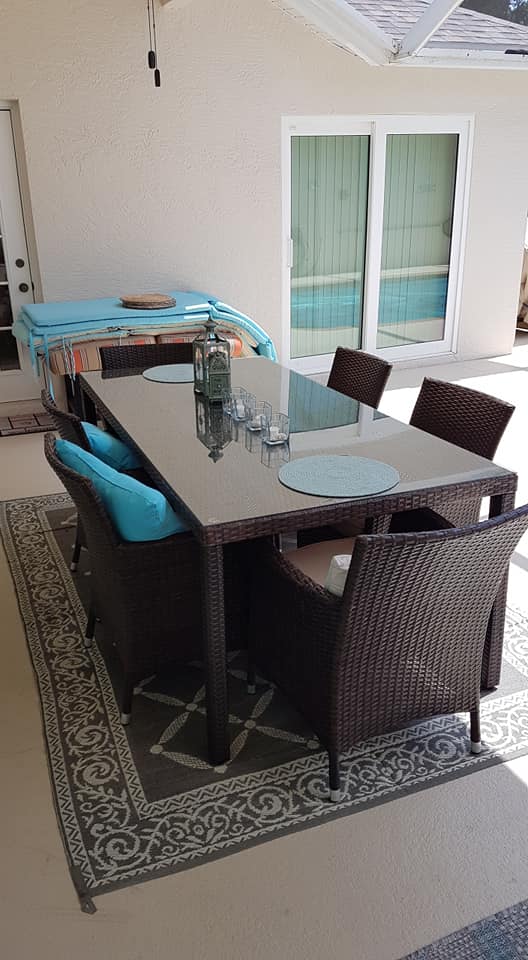 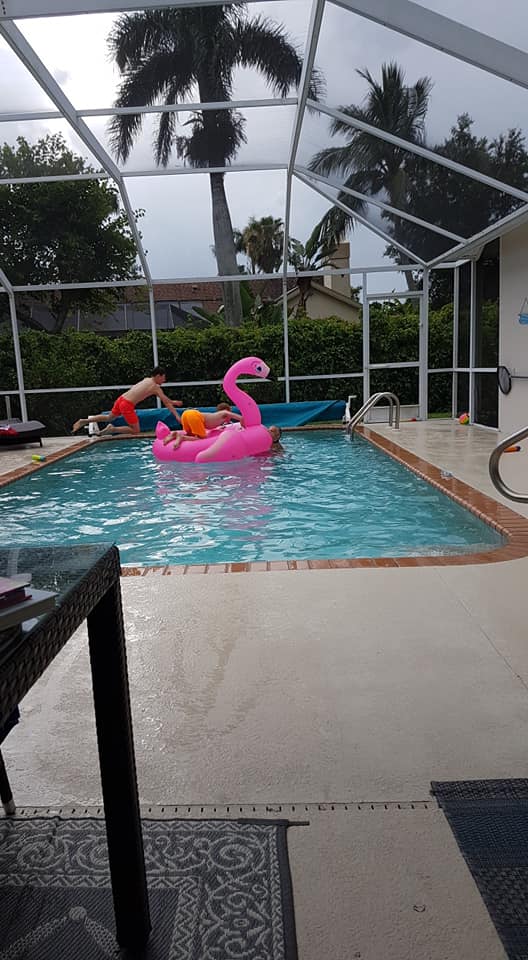 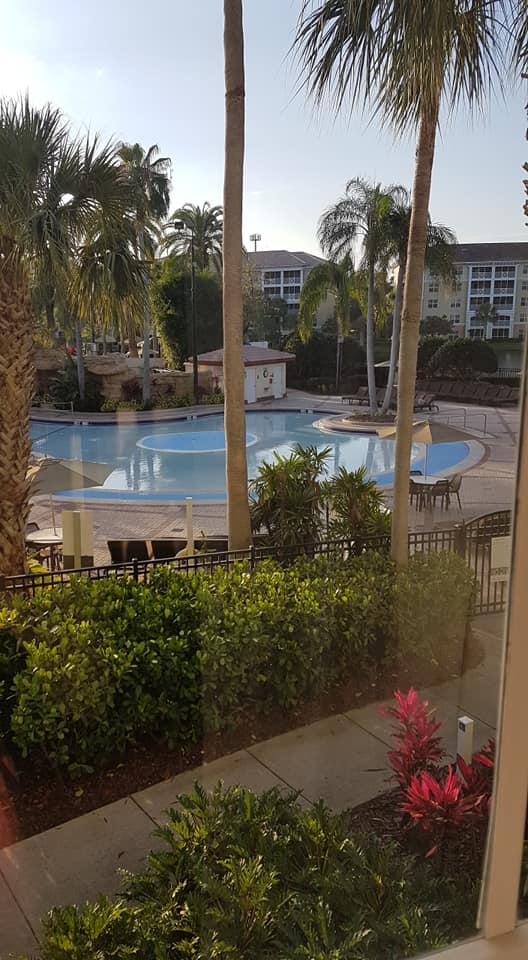 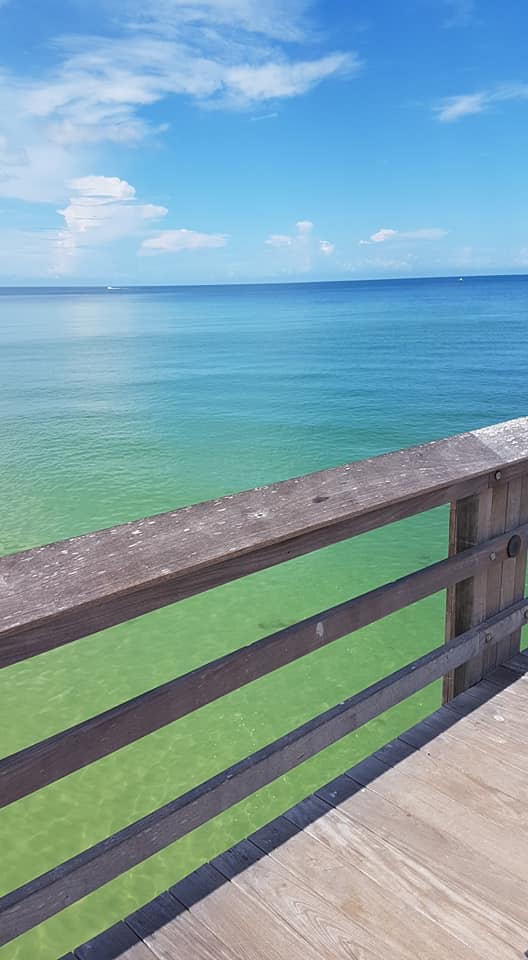 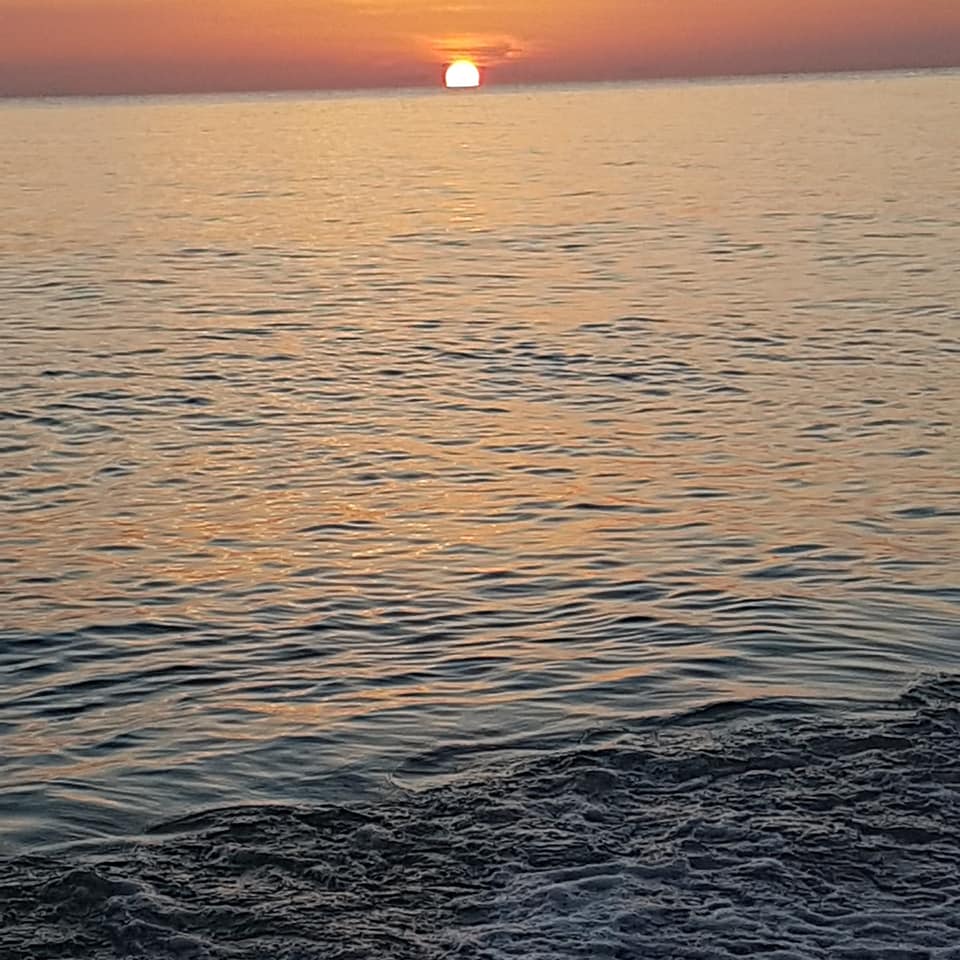 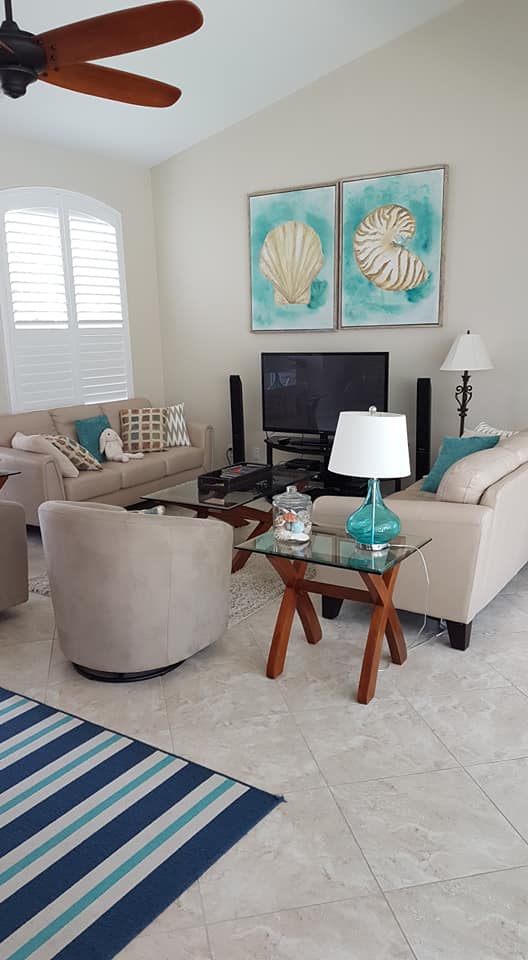 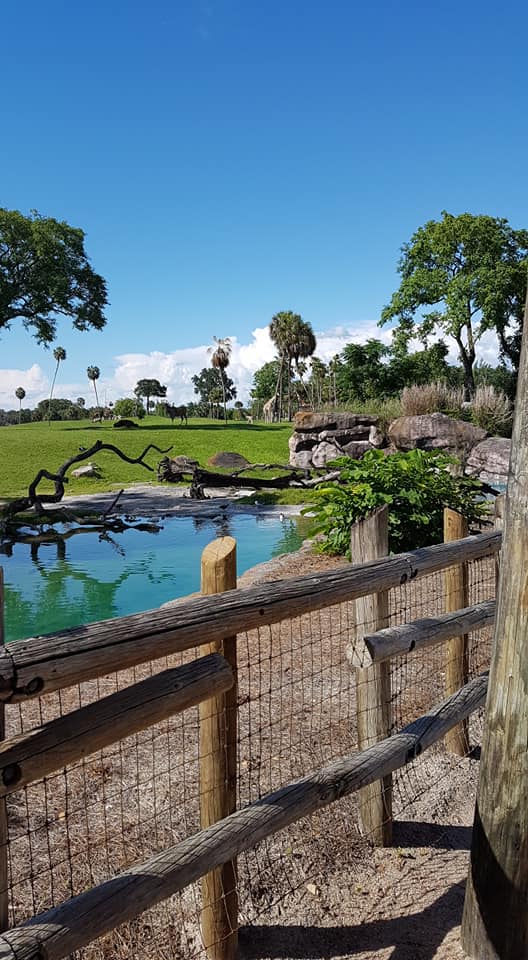 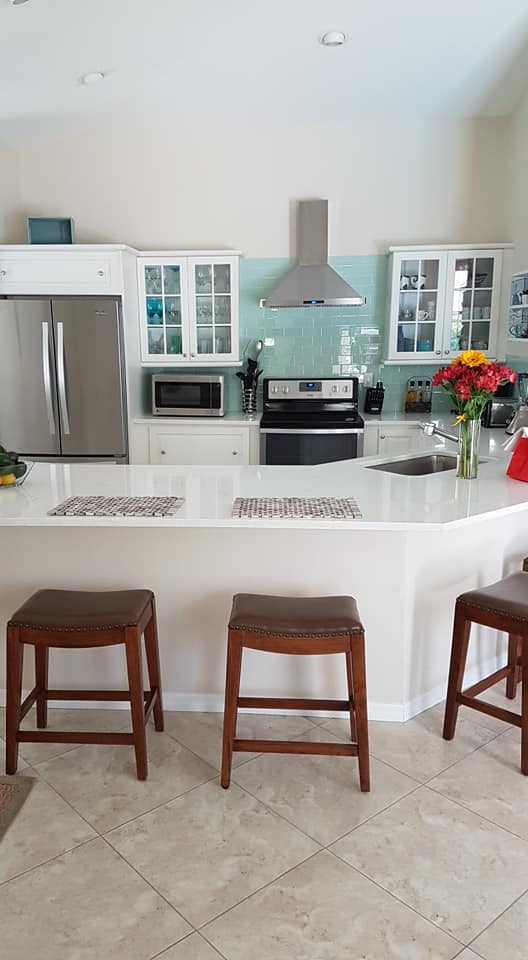 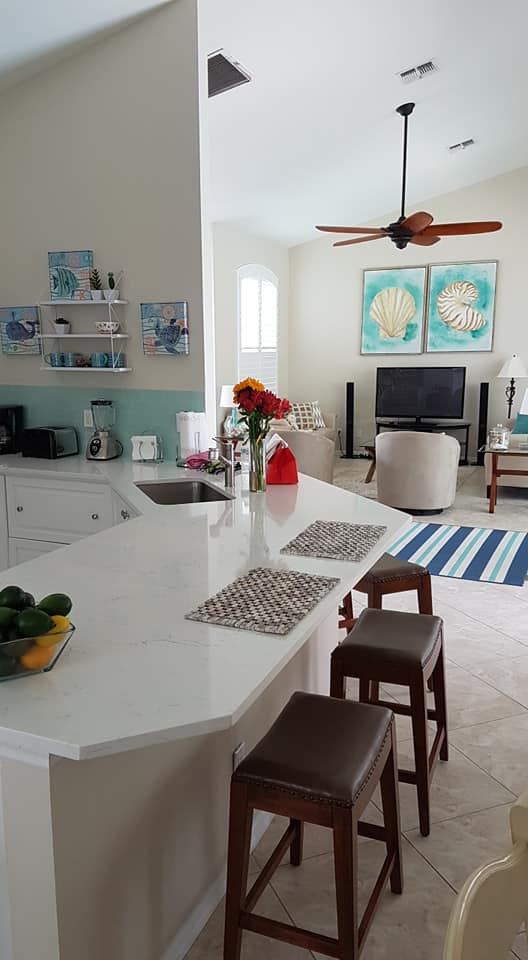 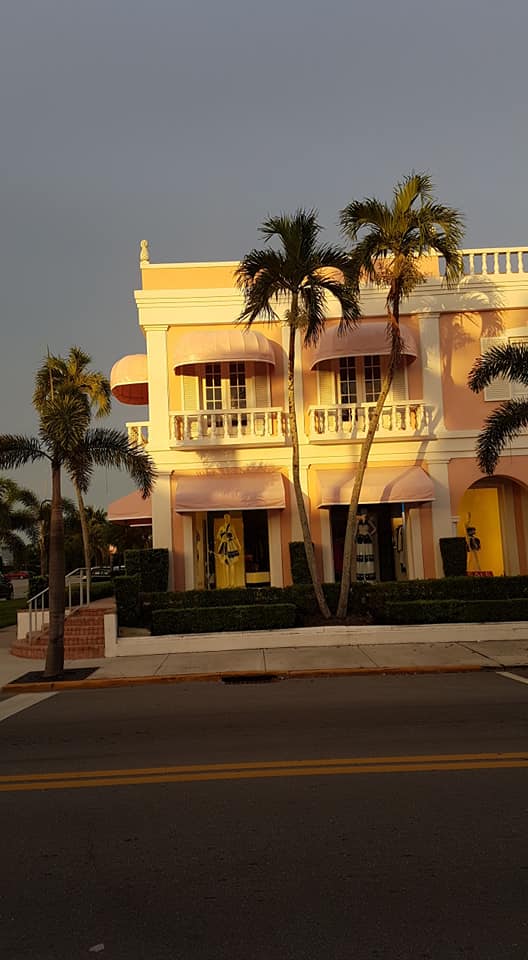 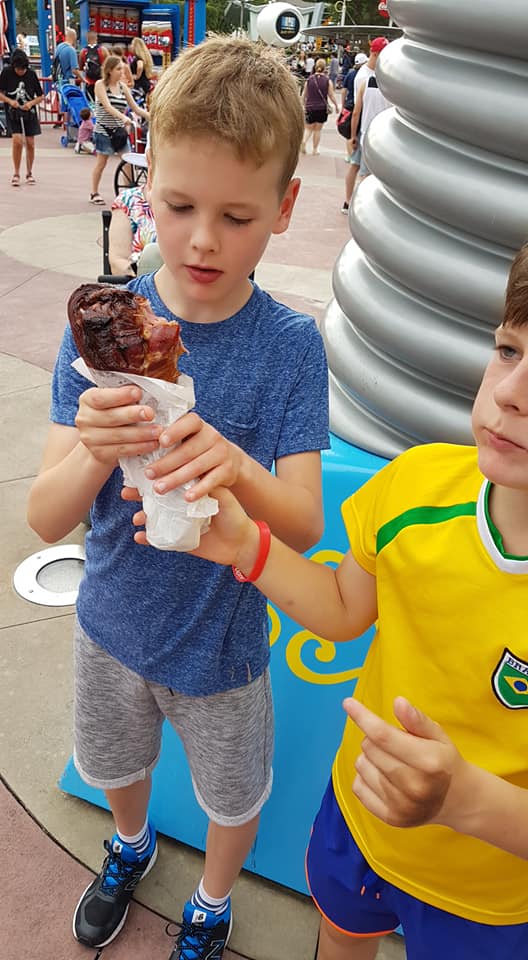 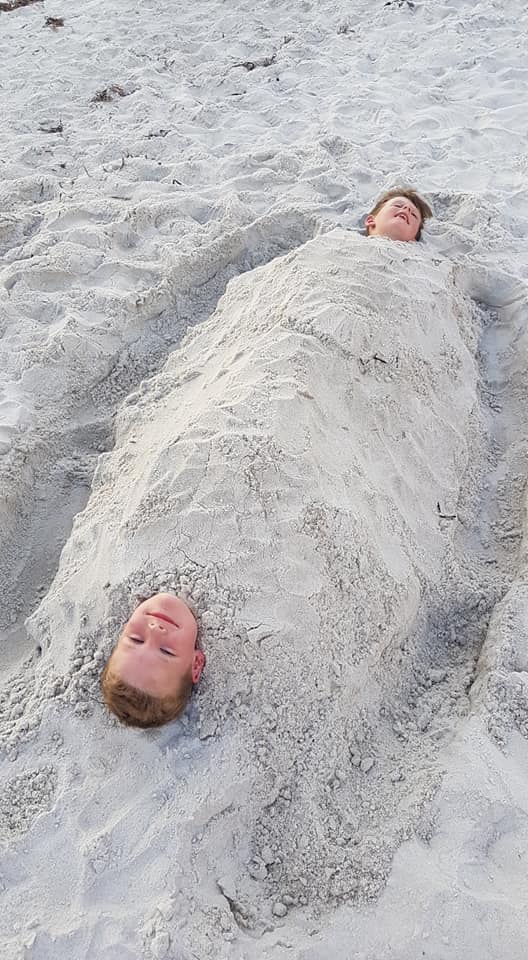 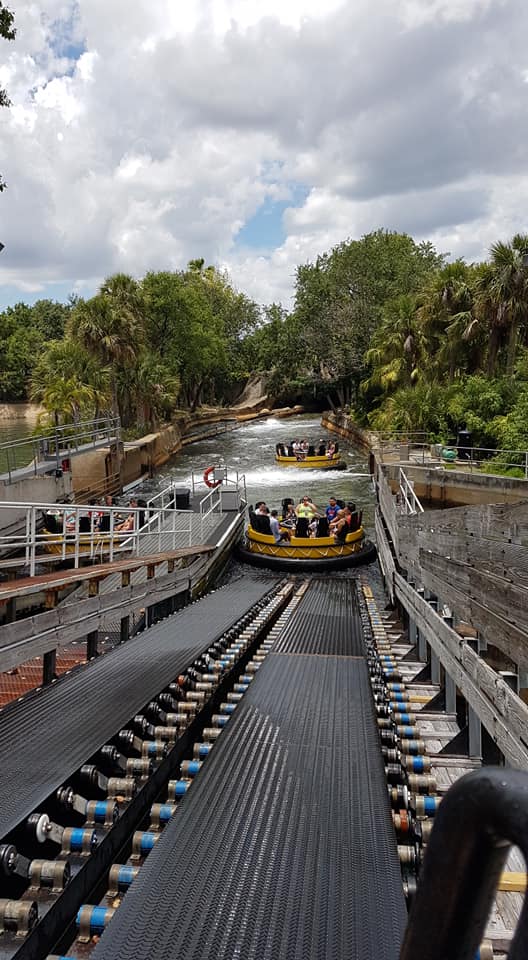 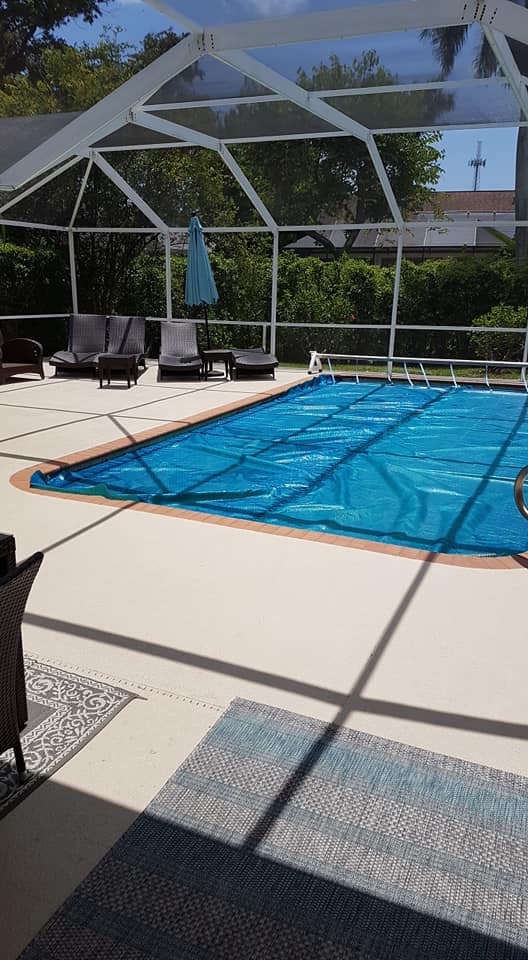 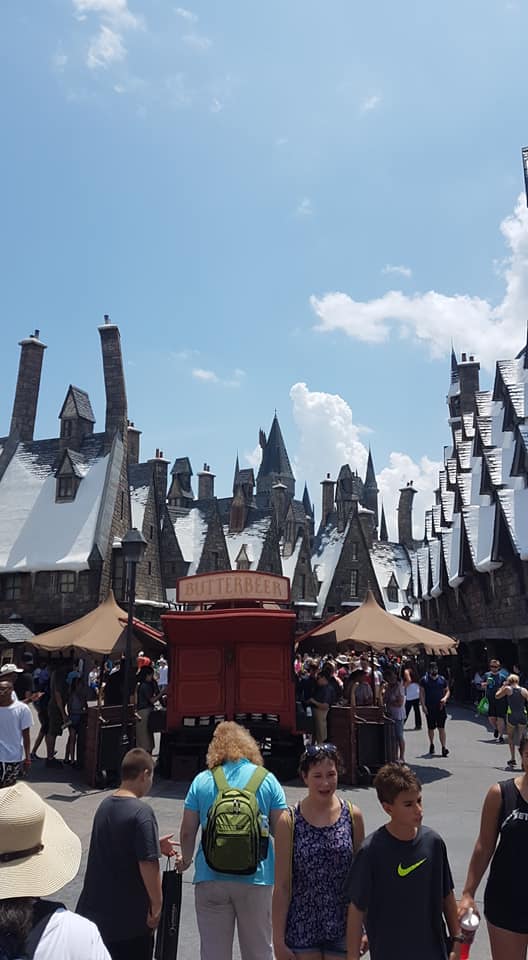